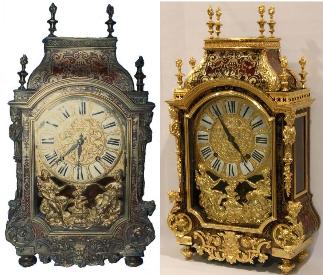 The clock was purchased on 7/9/1994 from Clements Antiques in Forney Texas. The clock movement was signed COQUEREL PARIS. Coquerel is listed in Tardy as a member of the French clock Jure in 1695 and passed away at the age of 51 in 1701. A 30-day time & strike movement with sunburst pendulum bob. The brass dial has enamel porcelain chapters stations and blued steel hands. It appeared that the clock escapement was originally a verge type and later converted to a more superior anchor escapement, which was commonly done to these old movements.  Dimensions: 27″ H x 13″ W x 6″ D.

Condition of the clock was in generally good condition for its age. Some Boulle marquetry was missing, raised or loose. All bronze figures and castings were in place except four of eight finials were missing. The wood structure was made of oak boards, and the top areas were the oak was exposed showed aging, slight cracks and most of the original finish gone.  At one time the clock had a door latch on the right front, which was missing. The front door bezel appears to be original but there is no latch catch.

The wooden case surface and structure was repaired. The faulty tortoise shell and brass inlay was removed, cleaned and attached with original hide glue. Five brass finials were forged using an old one to make a mold, and all fittings and castings were gold gilded. The dial was disassembled and cleaned; a piece of paper was found under the #2 cartouche stating, in French script, “this clock was won on a bet”.  A door latch and catch was made to replace the original missing one. The movement was completely disassembled, cleaned, adjusted and tested and it keeps excellent time.