Information and Maintenance Items for the Clock Owner 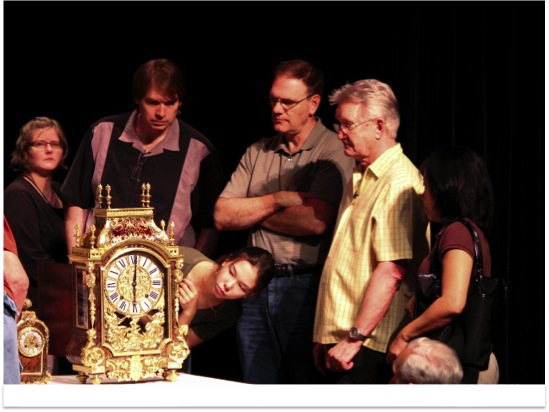 There are certain tasks listed below that clock owners can preform to ensure proper running and time keeping of their clock, of course there are always clock repairmen willing to do these tasks for a fee.

Most clock need to be wound once a week or daily. To do this, insert the key into the arbor protruding the dial and slowly turn the key in the clockwise direction or counterclockwise direction. When turned in the correct direction, the clock will produce a clicking sound indicating the correct winding direction. Continue to wind slowly until the key stops and you cannot turn it. Do not force beyond this point.

If you have a striking clock, then there will be a second winding arbor protruding the dial. Repeat the same procedure for the strike noting that this winding arbor may need to be turned in a different direction.

If your clock chimes at the quarter hour, then there will be a third winding arbor protruding the dial. Repeat the same procedure for the chime noting that this winding arbor may need to be turned in a different direction.

A clock case can be physically level and the clock will not run because it is not in beat.

Putting a clock in beat means setting the clock up to give an even tick and tock sound, which produces its most efficient running condition.

If your clock is in beat and the case is not level, a part on the clock called the “crutch” needs to be adjusted to fix this condition, and adjusting the crutch should be left to an experienced clock person or just let it run in an unleveled state.  Also, the clock can be in beat and not run, meaning it needs service.

2. Adjustment on the dial, if your clock has a small arbor protruding the dial near the “12” or the “6” or perhaps in the center of the dial, then use this method. You will need smaller key to turn the rating arbor.   Some clocks will have a “S or F” by this arbor. For a ‘S-F’ mark, turn the arbor clockwise for faster and counter-clockwise for a slower rate. With a ‘F-S’ marking, adjust the arbor opposite as stated above. If there are no ‘S or F’ markings near the arbor, then use the trial and error method to determine the correction direction to make the time adjustment. Some times this adjustment can be turned too far; so do not force the adjustment if it tightens.

If your clock does not strike the correct number of times as indicated by the hour hand then use this procedure to correct it.   Before attempting to synchronize the strike mechanism, make sure the clock is wound (see instructions above).   Turn the minute hand clockwise to “6” and if “12” is passed, stop and let the clock strike. At “6”, stop and let the clock strike; if it does not strike one time, then move the minute hand pass “12” without stopping, and then stop at “6”. The clock should now strike once at “6”.

Now turn the hand to “12” and stop. Count the number of strikes and then carefully move the smaller or hour hand (grasp the smaller hand near the center arbor when turning) to that number on the dial. (Example, if the clock strikes five, move the hour hand to “5” on the dial). Your clock is now synchronized. Now the clock needs to be set to the correct time; turn the minute hand clockwise around the dial letting the clock strike at “6” and “12” until the correct time is reached.

If the winding procedure above is followed, then a clock in good operating condition cannot be over wound, there are probably other reasons it will not run.

Many people have been told at some point in their life that a clock can be wound too tight, and that probably extends to a situations where a clock that is badly worn will not run when it is fully wound. So, if your clock has not been serviced in many years, and is fully wound, but will not run, then in all probability it needs service.

Mechanical clocks in good operating conditions only need to be oiled each three to six years, depending on the environmental exposure or less often in a cleaner, cooler setting.

Clocks should be cleaned each 8 to 10 years, again depending on the environment. If cleaning and oiling is not done on a regular basis, your clock will wear more rapidly and other more costly maintenance remedies will need to be preformed.

It is important that the accessory components of the clock be handled correctly during the move. On clocks that have weights & pendulums with finished brass, use soft gloves or cloth when handling these components. Please read this entire move instruction before attempting the task.